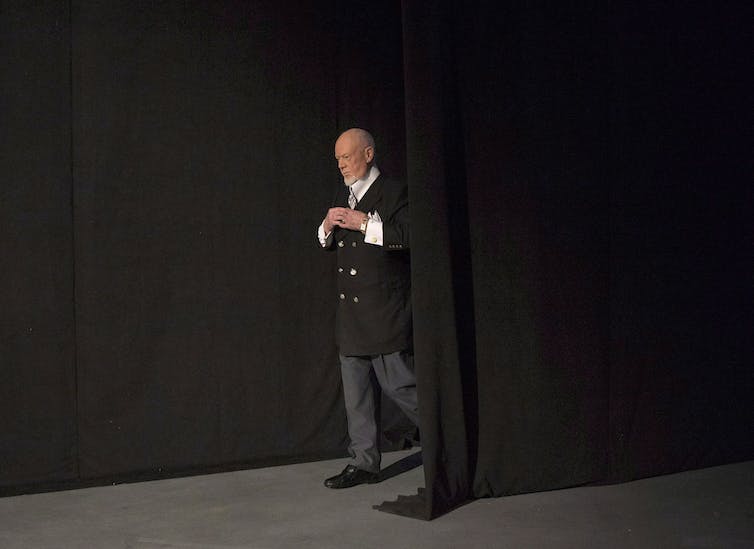 Don Cherry, seen here in 2014 as Rogers unveiled its team for the network’s NHL coverage, has rasied difficult questions for Canadians.
THE CANADIAN PRESS/Chris Young

It’s the age of Brexit, of Donald Trump’s “Make America Great Again” project and the rise of European populism, all of it following decades of free-trade agreements fuelled by globalization, transnational corporate expansion and more open borders.

As a result, some Canadians seem to struggle with questions central to the nationalism and globalization debate: Who counts as one of “us?” What defines “us?” Where did the idea of “us versus them” come from?

Don Cherry does not struggle with these questions.

But with Cherry’s recent offensive comments about immigrants and Remembrance Day, it’s possible he forced Canadians to think about these issues of “them” and “us.” And now that he’s been fired from Coach’s Corner, do we need to find a new, and better, public personality who can grapple respectfully with the questions that apparently still vex some Canadians?

Across four decades on the iconic Hockey Night in Canada television broadcast, Cherry made his feelings clear about what he believes constitutes a “real” Canadian, how moral Canadians should behave and what we should expect of those he doesn’t consider one of “us” but enjoy, as he put it, “our milk and honey.”

It’s not much of a surprise that the 85-year-old Cherry used his hockey pulpit to launch into an attack against “you people that come here” and baselessly accused immigrants of disrespecting Canadian veterans by not wearing poppies.

Others felt Cherry’s dismissal was warranted: a “last straw,” a decision made 30 years too late, an old man out of step with the changing times. There’s been speculation that Rogers’ advertising partners demanded action — particularly in light of the network’s “United Through Sport” motto and the fervent multi-ethnic support displayed during the Toronto Raptors 2019 NBA championship run.

Prior to Rogers’ $5.2 billion purchase of the NHL’s media rights in 2013, Cherry’s Coach’s Corner segments were the exclusive property of the Canadian Broadcasting Corporation. Not only did Cherry avoid dismissal in more than 30 years answering to CBC executives, he was one of the public broadcaster’s highest-paid employees, despite only appearing on television for seven minutes each Saturday during the hockey season (and every other night during the playoffs).

If the publicly funded CBC had still been deciding Cherry’s television fate, would he have kept his job? Would a public broadcaster dedicated to building a modern Canada, to creating space for the exchange of cultural ideas, to contributing to the development of a national sense of identity, continued to provide Cherry a hockey platform to express deeply conservative and negatively nationalistic views while demeaning those who dare to disagree? It did for many years.

In 2010, I wrote an academic paper that considered how Cherry unintentionally and unwittingly provoked the kind of democratically necessary discussions the CBC is expected to foster in the most Canadian of ways: through hockey analysis.

Using the famous essay “The Moral Equivalent of War” by philosopher William James, I considered Cherry’s positive and negative contributions to Canadian democracy.

James, a pacifist, argued that war’s indisputable contributions to the development of community and character required replacement with less devastating human practices. In turn, I argued that Cherry played a crucial role in triggering discussions about many important yet divisive (and subsequently avoided) topics including gender norms, French-English relations, fairness and justice, immigration and tolerance, Indigenous Peoples’ rights and responsibilities and the evolution of Canada.

But as James concluded, we must find better ways — or moral equivalents — to initiate this necessary process. While Cherry started debates, he was disinterested in either learning or arguing, opting instead to angrily tell us what is right or wrong.

Cherry’s final act on Coach’s Corner reflects the powerful and conflicted cultural role he played — suddenly some Canadians were defensive about whether they wore poppies, for example. We discussed his remarks with our children. And those who felt targeted by Cherry’s comments voiced their ideas about what it meant to be Canadian.

It’s hard to imagine the CBC in 2019, despite years of tolerance, allowing Cherry to continue on Coach’s Corner after such a pointed and hurtful anti-immigration rant (particularly since Cherry chose not to filter his rage through the prism of hockey which possibly protected him from greater censure over the years).

But now that Cherry will no longer be a Saturday night staple, we’ll learn if moral equivalents can emerge.

Who will generate reflection and discussion, intentionally or unintentionally, about the important and unavoidable conflicts and tensions that embroil Canada in 2019?

Will someone step into Cherry’s void and challenge people to confront “us and them” issues too often ignored?

Let’s see if Canadians can collectively pick it up from here, and have respectful and inclusive discussions about what it means today to be a Canadian in an increasingly multicultural country, and how we can do better in terms of how we treat and regard newcomers.

This article is republished from The Conversation under a Creative Commons license. Read the original article.

Trudeau has won the most seats — but not a majority....